Upon stepping through the front doors at Crystal Ridge Distillery, visitors can almost imagine they’re being transported back in time to an era when gangsters like Al Capone conducted illegal business on the very streets in Hot Springs where the city’s residents live and work today. 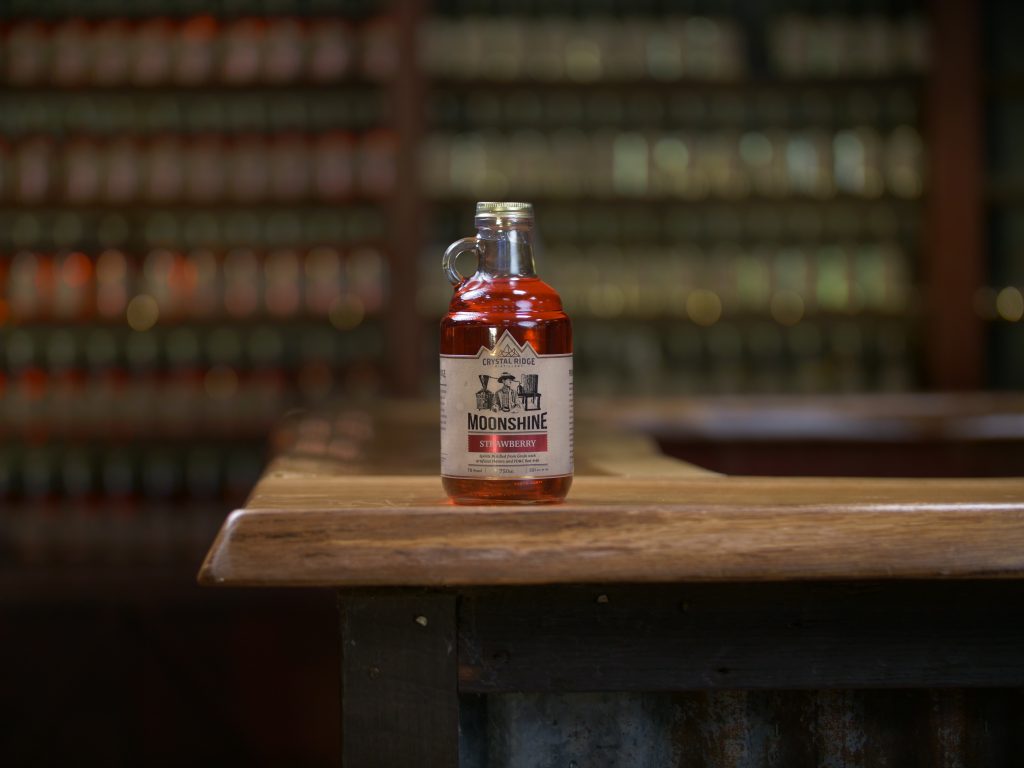 Hot Springs is widely known for its history of gangsters and gamblers in the early 1900s, but less is said about the illegal manufacture of moonshine during Prohibition from 1920 through 1933. Through guided tours, Crystal Ridge Distillery educates tourists and the people of Hot Springs on the moonshine history in Arkansas. This Arkansas distillery aims to bring light to the people in the hills who produced moonshine and brought it to Hot Springs a century ago.
Where did moonshine originate? The history of moonshine in America dates back to the 18th century when the spirit quickly became a mainstay of Southern culture. But, just as its popularity rose, so too did the government’s interest in it. Soon, untaxed moonshine was illegal. As a result, whiskey drinkers took to making and buying moonshine at night, under a blanket of darkness and the light of the moon, which some suspect gave rise to its name.
The production of Arkansas moonshine kicked into high gear in Garland County when the manufacture and sale of alcoholic beverages was banned in 1919. As a result, Hot Springs’ 31 saloons closed their doors, and bootleggers were in high demand.
Enforcing the law against moonshining was difficult, although arrests increased after thegovernment offered rewards for turning in stills and bootleggers. According to Liz Robbins, Executive Director of the Garland County Historical Society, in 1925, 1,293 violators of the liquor laws were arrested in Garland County, 84 stills were smashed, and 39,100 pounds of sugar to be used in mash were destroyed.
While the hunt for bootleggers was dangerous, not even violence could stop illegal production in Hot Springs. Moonshiners were inventive; in a ravine between rural Shady Grove Road and Gulpha Creek, officers found a steel burial casket serving as the pot of a moonshine distilling plant. Also off Shady Grove Road, officers discovered a still hidden in a hollow log after following several drunk and staggering hogs to its location.
For many in Hot Springs, moonshine wasn’t merely a hobby; it was a job. Moonshine manufacturing kept farmers and their families afloat during hard times. Cheap corn crops could be turned into high-value whiskey, and fruits like peaches were often incorporated for flavoring.
In the 1930s, Hot Springs was at its high point for gambling and a popular hangout for infamous mobsters like Al Capone and Frank Costello. To put things in perspective, in 1931, Hot Springs was home to 25,500 people and had 14-15 major hotels in operation, while Las Vegas had a population of 5,000 and not one single hotel. During this time, Al Capone would strike deals with bootleggers in Hot Springs to stock his clubs in Chicago with alcohol. He would then ship the illegal liquor in tanker railroad cars donning the words “Mountain Valley Water” as a cover.
The national Prohibition, due to its utter failure to enforce sobriety, ended in 1933. Although it’s still illegal to distill alcohol without a distilled spirits permit, whiskey connoisseurs are reinventing the spirit, making their hooch in distilleries, like Crystal Ridge Distillery.
In addition to selling an assortment of moonshine, bourbon, whiskey, and vodka, Crystal Ridge Distillery provides tours and tastings for guests to learn about the history and ingredients that go into their moonshine. And, the icing on the cake is that the distillery is housed in a building that was standing during the Prohibition era and likely witnessed Al Capone himself pass by on the sidewalk. So, schedule a tour, pull up a seat, and get ready to sip on a glass of American history.